Sorry I have not been blogging as frequently as normal. My computer is STILL not ready for me to use. It’s back in our possession, but the techies are loading my stuff on it. Hopefully tonight I’ll get it back. Almost two weeks. Incredible! I will say I have felt strangely liberated without my hip-attachment, although I do miss it.

A lot to catch you up on. Don’t have time to tell all right now, but here are a few highlights … 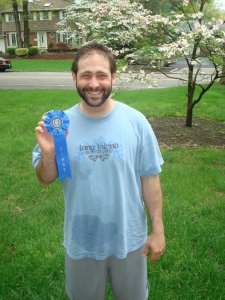 Saturday morning I ran in the Run For Youth, and surprisingly, won for running the farthest distance in the hour – and I started some 5-minutes+ late! 7 3/4 miles in less than an hour! I got a 1st place ribbon! I’ve always wanted one of those things! lol

Saturday night I played my first game of softball in over two years. I was playing fairly well – got my first hit on the first pitch ala A-Rod (but it was a solid line drive rather than a homerun), and made several outs playing second base. Unfortunately in the bottom of the second inning I went back to catch a pop-up in shallow right-center field. I called for the ball and made the catch, but unfortunately the right-center fielder was coming on strong and didn’t pull up in time. He slid into my ankle and buckled me. BUT, and this is a big but (no, not a big butt!) I held onto the ball! And it was for the third out! That, my friends, is the important part of the story!

I was going to wait until Monday to get my ankle checked, but by 11 p.m. it was swelling up and getting quite sore. I have sprained my ankle many times, but this one felt a bit different and I thought it might possibly be a hairline fracture, so at midnight I drove myself to the emergency room. X-rays showed that it was not fractured, but ….

Today I went to the orthopedist. She took another set of x-rays just to be certain. She did see an old fracture (I never knew about that. Just one of the times I thought it was sprained.), but affirmed that this time I had not fractured it. She also said that I also have some arthrtis in my ankle from so many sprains, and that I need to start slowing down in terms of my intense activities. NOOOOOO!!!!!! She wanted to put me in a cast, but decided not to due to the swelling. Instead she put me in a boot and has me staying on crutches (no weigh-bearing) for two more weeks, followed by physical therapy and another week or two on the crutches with some weight-bearing. Uhhh!