I once read of an American journalist who inquired of an African pastor why Africans worshipped God so passionately. The African pastor responded, “You Americans believe in God. We Africans depend on God.” SELAH!

I read the following in my devotional (Grace Notes) today. It was written by Philip Yancey and originally published as “Forgetting God” in the “Back Page” Column of Christianity Today, September 2004. May you be challenged as I was.
Forgetting God
Why decadence drives out discipline.
By Philip Yancey posted 9/01/2004 12:00AM

Observing the modern world, French sociologist Jacques Ellul noted a striking trend: As the Christian gospel permeates society, it tends to produce values that, paradoxically, contradict the gospel. I sometimes test his theory while traveling overseas. I ask foreigners about the United States, the world’s largest majority-Christian society.

“When I say the words United States, what comes to mind?” I ask. Invariably, I get these responses:

Wealth. Representing only 6 percent of the world’s population, the United States generates more than a third of the world’s economic output and dominates global finance.

Military power. We are, as the media constantly remind us, “the world’s only superpower.” Indeed, our current military budget exceeds the total of the next 23 biggest-spending nations combined.

Decadence. Overseas, most people get their images of the United States from Hollywood movies, which seem to them obsessed with sex and crime.

European nations, with their Christian roots, tend to manifest similar characteristics, which run counter to the teachings and example of Jesus, whose life was marked by poverty, self-sacrifice, and purity. No wonder followers of other religions, such as Islam, puzzle over Christianity, a powerful faith that nonetheless produces the opposite of its ideals in society at large. What accounts for this strange development?

I found a clue in the writings of Gordon Cosby, the founding pastor of Church of the Savior in Washington, D.C. He noted that high-commitment Christian communities begin with a strong sense of devotion, which expresses itself in a life of discipline. Groups organized around devotion and discipline tend to produce abundance, but ultimately that very success breaks down discipline and leads to decadence.

Cosby termed this pattern the “monastic cycle”—with good reason, for the movements led by idealists such as Francis of Assisi and Benedict of Nursia repeatedly demonstrate the cycle. In the sixth century, early Benedictines worked hard to clear forests and cultivate land, investing their surplus in drainage, livestock, and seed. Six centuries later, according to historian Paul Johnson, “Benedictine abbeys had virtually ceased to be spiritual institutions. They had become collegiate sinecures reserved very largely for members of the upper classes.” The abbots absorbed about half the order’s revenue in order to maintain their luxurious lifestyles, becoming “unenterprising, upper-class parasites.”

Dominicans, Jesuits, and Franciscans duplicated the cycle: an initial burst of devotion and discipline, a resulting period of abundance, then a drift toward indulgence until some reformer came along to revive the ideals of the founder. Protestant reformers faced the same challenge. John Wesley warned upwardly mobile Methodists:

I do not see how it is possible, in the nature of things, for any revival of religion to continue long. For religion must necessarily produce both industry and frugality, and these cannot but produce riches. But as riches increase, so will pride, anger, and love of the world in all its branches.

As the Old Testament shows, entire nations can fall into the same pattern. Hebrew prophets sounded the loudest alarms during times when ancient Israel appeared to be thriving. Whenever the economy boomed and peace prevailed, the Israelites attended less and less to spiritual matters and looked instead to military power and alliances for their security. In the prophets’ phrase, they forgot God.

Perhaps we should call this trend the “human cycle” rather than the “monastic cycle,” because it applies to individuals as well as to religious movements and nations. Beginning with Adam and Eve’s brief sojourn in Paradise, people have shown an inability to handle prosperity. We turn to God out of need and forget God when things go well.

Americans who go on short-term mission trips to third-world countries often return with glowing reports about the fervency they found among believers. Eager faith in the midst of poverty and oppression contrasts sharply with the complacency and self-centeredness in our land of plenty.

Observing this trend in numerous countries, I better understand why Jesus warned against wealth and called the poor and persecuted “blessed.” Out of sheer desperation, the needy may turn to God. Meanwhile I worry about my own society, which relies mainly on its wealth and power and fills every vacant space with entertainment options. Can we, in a time of abundance, find a way to break the “monastic cycle”? On the answer to that question, our future health may hinge.

Found these statements by Grammy-Award winning singer and founder of The Fugees, Wyclef Jean, who is considering jumping into the race for the presidency in Haiti intriguing:

“So I would think with all my allies around the world that have loved my music, that have loved the message and the work we have done with Yele Haiti, they understand I can’t just sing right now.”

“When I am looking back at my career, I’ve sung songs all my life and I’ve watched singers sing songs about certain changes that we want, we say, you know what, we’re going to turn them into a reality.” – Wyclef Jean

Just read Welcoming the Stranger: Justice, Compassion & Truth in the Immigration Debate by Matthew Soerens and Jenny Hwang, an excellent book with biblical insight, good information, a balanced assessment of the dilemma our nation is in, and constructive criticism to inform a Christian’s response to the Immigration debate and lead us toward a positive solution to the crisis. Highly recommended! 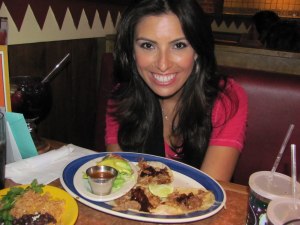 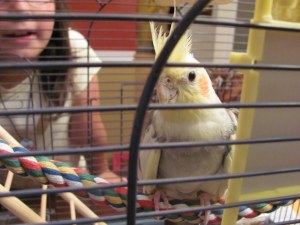 This has been around for a lot of years. It’s an oldie but goodie. If you haven’t seen it before, you’re in for a real treat. 🙂

Claudia and the Georgia team arrived home safely today. We were very excited to see her walking toward us and so glad to be able to hug her after a week apart. She’s growing up so fast! During our ride back home we heard great reports about the ministry the team was involved in and some of the things the Lord was teaching Claudia during the trip. Claudia shared her testimony twice during the trip and was very active in all of the drama presentations. So proud of our girl! We also learned that she saw Joan Rivers in the airport and a former NFL football player Tito Wooten at a ministry location. 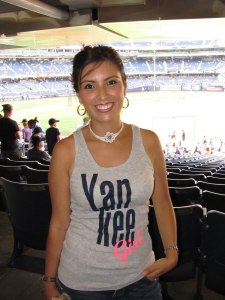 Happy Birthday to my gorgeous wife Adriana. I am so blessed to be called her husband, and it is a great joy doing life with her, raising our daughters and mentoring students for Jesus. Today we will go and pick up our oldest daughter Claudia from the airport as she returns home from her first missions trip, and that is the best present Mommy could ask for. Last night we went to the Yankees’ game with our friends Tommy & Naomi to celebrate Naomi’s and Ady’s birthdays – Naomi’s on the 22nd, and Ady’s on the 23rd. During the game Derek Jeter hit an inside-the-park home run, and Alex Rodriguez hit career home run #599. We had our cameras rolling hoping for #600 in his final at bat of the game, but he hit a solid double instead. So disappointing! lol! You can see all of our pics from the game here.