Last night I went to bed at 1 a.m. I woke up in what I thought was the middle of the night only to discover it was only 2 a.m. Try as I might I could not get back to sleep. I tried different sleeping positions, I tried reading, I tried everything, but to no avail. At 7:30 a.m. I finally got a shower and went down to the house for breakfast. We had grapefruit, papaya, and toast with Anne Street’s home-made butter and jam. After breakfast we met a woman named Vicki from California who is boarding with the Streets, then grandpa and I went into town with Steve to get some supplies – a little rice, some wood, and some phone cards – and to run to the bank. When we returned I caught an hour-long nap and felt a little bit human again. A young missionary named Dusty from Georgia joined us for lunch. After lunch I checked e-mail, had some coffee with Anne & Steve, and took some photos of their property including a beautiful jacaranda tree and some of the lizards running around including a very colorful one called an Agama. This afternoon has just been chill as we’re still trying to get over jet-lag. I feel so fried and I am hopeful that tonight I will finally crash. Tomorrow I will be preaching at the Street’s church.

Hello everyone! We have just arrived at the home of the Streets (missionaries) and have just settled in our rooms and are now having some coffee and cookies with Steve and Anne. We had a long trip here, but it was good. Thanks to a family connection we were able to fly business class from Detroit to Amsterdam. Grandpa got some sleep, but I only got an hour or so. At the airport we caught another brief nap before our flight to Kilimanjaro. On that flight I was able to get in about 4 hours of sleep, but I was jammed in the middle seat and it was really tight. Anyhoo, all in all it was long but good. It was 26 hours from the time I left JFK to the time we landed in Tanzania. We took about an hour to get our visas, immigration, customs, etc. but we got all of our luggage OK and about a half hour later we were at the Streets. Miss you all! Love ya Ady, Clau & Natis! I’m going to take a shower and get to bed.

This morning I said goodbye to my family and am on my way. I am presently sitting in the Detroit airport with my grandfather awaiting our flight to Amsterdam and then on to Tanzania. Missing my girls already! 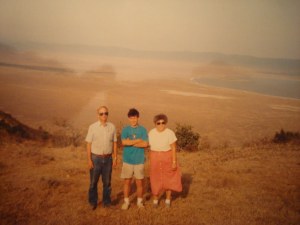 Tomorrow morning I am off to Tanzania, Africa for a time of ministry with my grandfather, Dan Larkin. We will be teaching at Kilimanjaro Christian College which my grandfather founded almost 20 years ago. I was there as a 15-year-old kid on my first international missions trip in 1991 and we helped to construct the college laying the foundation, making bricks, and building the walls to about 6′ high by the time we left. It is a great joy and privilege to be able to journey back there 18 years later to train Christian leaders — and to be able to share such a great experience with my grandfather. I will do my best to keep you all updated as I have internet access. Thank you for your prayers and support!

Watched the live concert feed on YouTube. It was absolutely amazing! Watch the full rebroadcast here.

Here’s a FREEBIE for you! It’s a copy of our Adult Youth Leader Application Packet. It’s what we give to prospective leaders. It includes an overview of our ministry, resources, and application materials. Feel free to adapt it to meet your ministry context. Enjoy!

HEMA is a Dutch department store. The first store opened on November 4, 1926, in Amsterdam . Now there are 150 stores all over the Netherlands.

Take a look at HEMA’s product page – just wait a couple of seconds and watch whathappens.

DON’T click on any of the items in the picture, just wait.

This company has a sense of humor and a great computer programmer, who has too much time on his hands.

Do you ever watch The Dog Whisperer? I love that show! One of the things that Cesar Millan says is, “I train people; I rehabilitate dogs.” His premise is that more often than not when dogs are having behavioral problems, it is not because they want to misbehave, but because the owners are not being the pack leaders the dogs need them to be. Is there not a grain of truth in that for us as parents? While our children are certainly not dogs, consider this. I sometimes hear parents say things like, “My kid is out of control … I just can’t … We’ve tried everything … We don’t know what to do.” While issues surrounding parenting teens are complex, I believe sometimes we need someone like The Dog Whisperer (someone actually wrote a book a few years ago called The Teen Whisperer) to come along, ask us questions, and help us see things in a new light. Sometimes we need to look in the mirror and ask if we are doing all we can do as parents to give our kids the structure they need before we blame our kids and throw up our hands in despair. Perhaps you have heard the following story in the news the past few weeks …

“When their teenage daughter Emma went into a goth phase a while back, Debra Kelley and Mark Niederbrock thought long and hard about what to do and decided to accept her adolescent rebellion rather than fight it.”

“Emma … was just going through a rough period. Thus they allowed her to invite Richard “Sammy” McCroskey to fly out and spend a few days. Fearing that Emma might run away with McCroskey if they forbade her from attending a horrorcore mash-up called the Strictly for the Wicked Festival in Michigan, they drove the teens 1,300 miles there and back. ‘Debra thought at least if we take them there we’ll make sure they’re safe.”

“‘Debra and Mark were greatly concerned,’ says [a friend] … ‘But they concluded … that ‘you either go along with kids or watch them walk out the door.’ Now friends wish the couple had pushed back. On Sept. 18 police discovered the bodies of Emma, her parents, along with that of a friend … at their home in Farmville, [VA] …” allegedly murdered by McCroskey. (“Real Life Horror” People Magazine, October 26, 2009, pp. 119-121, (Underlines added.))

When I first saw this story on the news a few weeks ago, I was filled with many emotions, but one feeling that I did not experience was surprise. Unfortunately, as the story unfolded, I saw the recipe for disaster – a pattern that I see too often in too many families today (not yours, of course). Obviously, the tragic way this story ended is a rare exception, but take away the gruesome murders and you will probably recognize the story. Parents think child is cute and don’t discipline. Child hits adolescence. Child makes threats to get what they want. Parents panic. Parents give in. Child takes over.

I believe at the core of this scenario is one central issue: Lack of leadership! Parents giving in to the pressure of manipulative children who use their parents’ fears (ex. “I’ll run away!”) to get what they want. When I stand back I ask: Who is running this house? Too often the answer comes back: the child. This is not how God intends our homes to operate. Too many parents today want to be liked by their kids. Sorry! Being liked is overrated! Don’t waste your time trying to get your kids to like you. Seek, rather, to be a person with the fortitude to make tough decisions and stick by them, and the godly character that your children will respect. Your kid doesn’t need another friend. They need a leader! They need courageous parents!

So many of you do such a wonderful job of being the leaders of your homes. I always want to acknowledge that truth! You set such a great example, not only for your children, but also for other parents like myself. This is by no means meant to be a “beat-you-up” kind of article. On the contrary, my hope is that all of us would take some time to assess ourselves as leaders. Let’s not simply look outward; let’s look inward and ask if we are standing in the rightful, God-ordained place of leadership that God has called us to as parents. Are we being the leaders our children need us to be? Adriana and I are constantly asking this question of ourselves as we seek to raise our children for Jesus. Sometimes it’s easy. More often than not it’s very tough. But one thing I know: Leadership is always necessary.