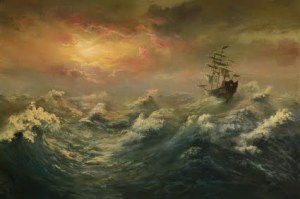 This past weekend our Worship Pastor Christopher Dobson mentioned this story before a specific song and it has been churning in me all week. In a meeting today the buzzer went off on the crock pot of my heart and I had some thoughts that I hope are as helpful to you as they are to me.

Setting: This story in the book of Matthew immediately follows the feeding of the 5000. Read below.

“Immediately Jesus made His disciples get into the boat and go before Him to the other side, while He sent the multitudes away. And when He had sent the multitudes away, He went up on the mountain by Himself to pray. Now when evening came, He was alone there. But the boat was now in the middle of the sea, tossed by the waves, for the wind was contrary. Now in the fourth watch of the night Jesus went to them, walking on the sea. And when the disciples saw Him walking on the sea, they were troubled, saying, ‘It is a ghost!’ And they cried out for fear. But immediately Jesus spoke to them, saying, ‘Be of good cheer! It is I; do not be afraid’” (Matthew 14:22-27 NKJV).

So the story is pretty clear and the point that Christopher made on Sunday was that the disciples obeyed Jesus … and by obeying they landed themselves in the middle of a storm.

It could be that you are in the middle of a storm right now and not because there is any big mistake that you have made or sin that you can pinpoint.

Realize this … Jesus knew when he sent the disciples into the boat that he was sending them into a storm. He also sent them without his immediate presence in the boat. They waved goodbye and didn’t think anything until the wind picked up. When the wind and waves reached a certain strength, they began to doubt, fear and question what Jesus had done. “Why isn’t he here?” “Why would he send us into this?” “Has he forgotten about us?” “Are we going to die?” Then Jesus comes to them walking on the water. At first they thought he was a ghost and were all the more afraid. Eventually they reconized him and then Peter asks Jesus to call to him so he can walk on the water too.

2 things stand out in this for me:

#1. Jesus didn’t immediately calm the storm when he approached the boat. The disciples would probably have recognized him a lot easier if there weren’t waves, wind, spray tossing everywhere. If they didn’t have to fear for their lives, it would be much easier to focus on Jesus.

This tells me that Jesus’s priority isn’t our comfort. He is even ok with us not being able to see him clearly. I believe the reason Jesus didn’t immediately calm the storm is ….

#2. He wanted to meet the disciples in the storm. This was the same Jesus that hours earlier they had seen on the shore, waved goodbye to and glanced back at as they drifted into the sea. When they said goodbye, there was no urgency, no fear of death, no questioning or doubting. I can only imagine how much Jesus loved being himself in that storm environment. He always cared. Always loved. Always rescued. But in a storm the disciples could finally see him for all he really is.

All that to say this …

If you are in a storm and Jesus isn’t calming it as fast as you want … it’s probably because there are parts of his nature, care and love that he can’t show you on glassy seas. Only in the storm do you see him for who he loves to be. Let him be that to you today in your storm and maybe just maybe … one day you will thank him for the storm you in right now.