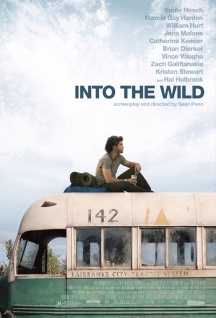 This past weekend I read the book Into the Wild. It has also been made into a movie which I will surely watch in the near future.
From the cover: “In April 1992 a young man from a well-to-do family hitchhiked to Alaska and walked alone into the wilderness north of Mt. McKinley. His name was Christopher Johnson McCandless. He had given $25,000 in savings to charity, abandoned his car and most of his possessions, burned all the cash in his wallet, and invented a new life for himself. Four months later, his decomposed body was found by a moose hunter …”
It was a gripping yet tragic story with many great talking points about family, forgiveness, relationships, ideals, materialism, simplicity, planning, and other important topics. You can order it here.

(One of the final acts of Chris before his death was to take this photograph of himself.)