First NFL Game & Breaking Down in the Bronx 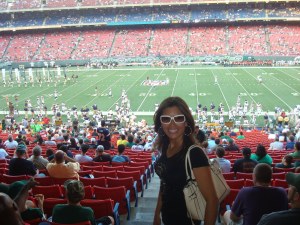 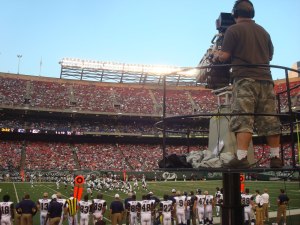 On Thursday a friend called me and said he had 2 tickets for the front row on the 50 yard line at Giant’s Stadium to see the Jets pre-season game against the Rams for the Friday night game. Having never been to an NFL game I jumped on it, and on Friday afternoon Ady and I drove to the Meadowlands for the game. The tickets included access to the Stadium Club restaurant, so before the game we enjoyed an awesome buffet. We then made our way to our seats just 10 yards behind the Rams’ bench. The game was quite enjoyable, and during half-time we even connected with our friend Jimmy, his son Vincent, and Pastor Todd and his son Taylor who were also at the game. A guy came down to us and asked in we were a Hollywood power couple and wanted to take our picture. Actually, I think he was a smoothy who just wanted a picture of my beautiful wife, but we had fun and then had him take a picture of us with our camera. The one sad note was a Rams fan who was there with his son who was being loud and obnoxious. No big deal for us – in fact, we had fun laughing at his boisterous ways, but sure enough he got into it with another guy and they almost got into a fight. The security guard separated them, but near the end the Jets fan got up to leave and just had to start in. They cursed each other out and got in one another’s face. During this time we were caught up watching the guy’s little boy who was terrified of what was happening. He was trying to be courageous, but his lip was quivering as he horrifyingly watched his daddy almost get into a fight. The security guard then went to the guy and told him he would have to leave. The poor little boy! His excitement of going to a pro football game with his daddy. Daddy got obnoxious and couldn’t control his temper. Not their evening out together had turned into a sad disappointment. As they were escorted out the little boy was crying as the dad walked out proud of his manliness. It was so sad! All this boy is going to remember is how the night ended. What a sad legacy!

After the game we drove home. After a bit of traffic on 95 we were cruising down the Cross Bronx about to get on the Throg’s Neck Bridge when suddenly I got a flat tire. We had never had to use our spare, so when we went to find it, we were surprised that there was not one in the back. We drove to the nearest exit – about 1/2 mile up – and got into a gas station. There, looking through the manual, Adriana found that we might have a tire under the middle of the vehicle in between the front seats. Sure enough, there it was. I figured we would be on our way in five minutes. Unfortunately, the spare tire cover would not come off, and for over an hour I tried unsuccessfully to remove it. Finally we called the insurance company who said they would send someone out to help us. A half hour later they called me back to inform me that we were in a restricted area and they would not be able to help us. Dang Bronx! I tried for another hour to no avail. Finally, at 1:30 – 3 hours after we got our flat – I was sweaty and exhausted, and I told Ady we would just sleep in the van and deal with it in the morning. She was not keen on that idea and decided to go into the gas station to see if they had some tools. Tools were not going to help, but I wasn’t going to stop her. A couple of minutes later she came back with a number for a 24-hour tow company. We called and the guy said he would be to us in 20 minutes. He ended up towing us a couple of miles to a 24-hour tire-repair place. For about $100 we were towed, got our tire plugged, and got on the road home. (Even the tow guy and the tire repair guy could not get our spare off. Crazy!) We got home just before 3 a.m. and I have never had a more satisfying shower or better night of sleep in my entire life. What a fun date with a memorable exclamation point at the end.