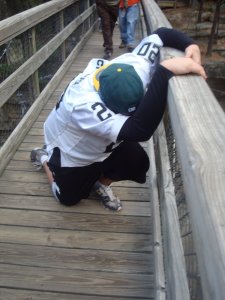 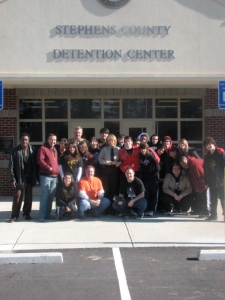 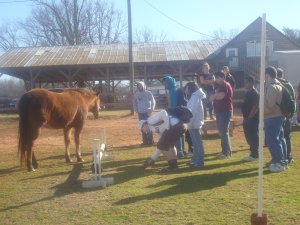 After lunch our team headed to Shepherd’s Hill Farm which runs a residential program as well as summer camps using horses to help troubled teens, as therapy for disabled people, and to teach leadership and team work. We were planning on helping around the farm by cleaning up … you know … animal “stuff”, but unfortunately (or fortunately, however you want to look at it) the trailer had not arrived and there was no place to put the “stuff”, so instead of serving we ended up with a real treat. The folks from the farm spoke to our team about life and shared lessons that horses can teach us about life in Christ. Two of the girls who are residents of the program gave us a demonstration of what they have been able to accomplish and shared a bit from their own lives. Following that they split us into two teams and gave us a challenge. Each team had 15 minutes to get one of four horses to jump a hurdle. The first team went while team 2 watched. This was a great advantage to team 2 which was able to learn from their observation of team 1. We learned much about leadership, teamwork, and most of all ourselves in the process. I won’t take time to spell out all of the things we learned through this exercise, but it was a real eye-opener and a real treat.

After dinner (John Long ribs … once again, doesn’t feel right to eat this good on a missions trip! lol Thanks John!) we all went down by the lake where we had an awesome camp fire cranking. We spent three hours debriefing our day, sharing, praying for one another, and worshiping the Lord. It was a beautiful and special experience. Lots of tissues were needed, and when those ran out sweatshirt sleeves sufficed. After the serious time the air filled with laughter as the team began to sing silly songs and children’s rhymes, and we headed up to the cafeteria where we enjoyed some cake in honor of Matt Moreo’s birthday. It was a fun and fruitful day!

This morning we went to the Stephen’s County Jail. We were told we would be doing some ministry, but when we arrived we were informed that due to a recent policy change we would not be able to interact with the inmates. Not all was lost, however. The sheriff and the chaplain gave us al a tour of the jail including a trip to the tower where we could observe the prisoners in their pods. It was definitely a great experience in terms of giving our students a glimpse of what life is like behind bars. No clocks, no time outside whatsoever, no television … in short, no fun! At the end of the tour we did do a bit of ministry. We prayed over the sheriff and over the entire jail. She was very touched that we did that.

After the jail we went to the Senior Center, a community center for senior citizens. We did a couple of our pieces for them as they ate lunch. Afterward we had a chance to clean their tables, meet the folks, and pray for many of them. Following our time there we went back to camp for lunch.

This afternoon we went to The Boys & Girls Club where we ministered to and played with the kids who were there. After our time there we went to the Tallulah Gorge and hiked down the 1,062 steps and all the way back up. It was a great workout and absolutely stunning scenery. Everyone on the team made it. On the way back up a lady who was coming down asked me if I was the youth pastor. After I said I was, she said that she had seen our shuttle and grew up in our church. I couldn’t believe it! After talking a bit I asked her for her name and she said that her maiden name was Burd. Incredibly, she was Laurie, sister of Danny Burd of YWAM. How crazy is that? We spent quite a bit of time talking with her. Very cool! After dinner we gathered together for a team meeting and will be turning in early tonight. I am certain that everyone will sleep very well tonight after such a big workout! Thanks again for your love and support!