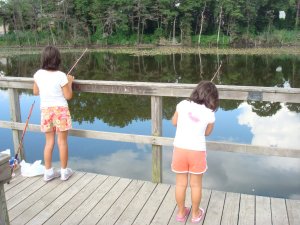 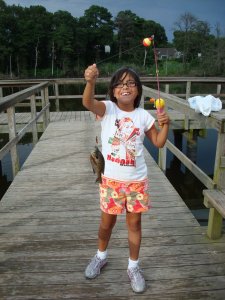 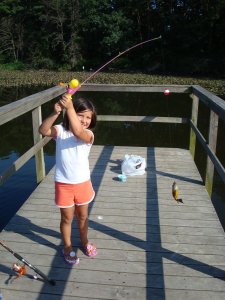 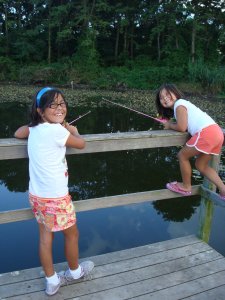 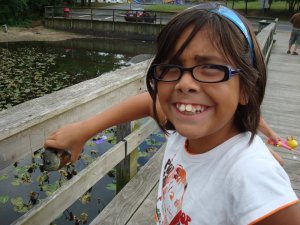 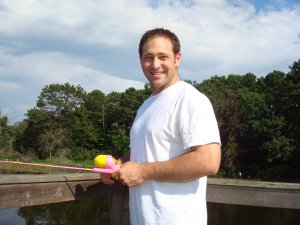 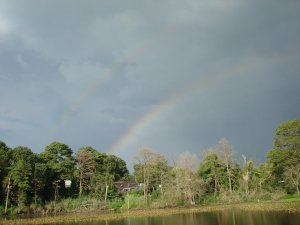 Today I took my daughter to the park to play while my wife was painting their rooms. As we were walking to the car I saw a grasshopper. I mentioned to my daughter that when I was a kid we would catch grasshoppers and use them as bait for fishing. “Hey,” I said, “Would you girls like to go fishing?” They both said yes, so we ran home and grabbed our fishing poles and headed off to a pond near our home. Natalia quickly caught a blue gill, and everyone who was fishing was excited because none of them had caught anything all day. Everyone was excited, that is, except Natalia who started freaking out and wouldn’t even hold her pole for a picture because she thought the fish was “disgusting.” A while later she caught another one and this time allowed me to take her picture, although she would certainly not touch the fish. Clouds started rolling in, it started thundering and a few lightning strikes could be seen in the distance. I, however, am a very determined individual, and I was intent on helping Claudia land a fish. She said it was OK, we could just leave, but I could see her dejection. As we fished through the raindrops, she kept getting bites, but nothing would go for it all the way. The rain was light and lasted only a few minutes. Suddenly the sun was shinning and we saw not one, but two rainbows! Just after that she finally caught one!!! It was quite a fun time for the three of us! I have been enjoying spending time with my family during the last few weeks after a very busy school year, and a July during which I was gone from home for about 3 weeks.